The commercial seal slaughter has long been a bloody stain on Canada’s reputation. Every spring, the Canadian government lets sealers club, shoot, and skin baby seals in Atlantic Canada—most of them only a few weeks or months old—simply so their fur can be turned into luxury products for foreign markets.

I was pleased to team up this year with our friends at the Sea Shepherd Conservation Society as a crew member for Operation Ice Watch 2017. Sea Shepherd and its founder Paul Watson have been fighting to save seals for over 40 years. On this trip our mission was to visit seals on the ice with Hollywood actress Michelle Rodriguez, and remind the world to keep pressuring Canada to end the bloody slaughter of baby seals.

The seal slaughter has always been devastating to me. I grew up in Prince Edward Island—not far from where the killing takes place—and I can still remember the shock and sadness I felt as a child when I first saw footage of gentle baby seals seals being chased and clubbed by sealers.

Since then, I’ve been lucky enough to meet harp seals in their icy nursery. Spending time with these creatures is an incredible experience, but meeting them makes it even more heartbreaking to return to the ice a few short weeks later when sealing season opened. Working with Humane Society International/Canada, I’ve helped document the slaughter, expose its cruelty to people around the world, and push other countries to ban seal product imports. Fighting to save seals helped inspire me to become a lawyer and use the law as tool to protect animals.

Ten years after my first visit to the ice, I returned. On our first day the Sea Shepherd team took off from the Charlottetown airport and flew out to the Gulf of St. Lawrence, hoping to find the seal nursery. Searching for seals is akin to finding a needle in a haystack. The Gulf is around 155,000 square kilometres, and spotting a patch of seals that may be only a few kilometres wide can sometimes feel impossible.

But as I looked down from the helicopter, not only did I not see seals, I didn’t even see any ice. I saw large expanses of dark, open water instead of the solid, packed sea ice that should be there at that time of year. Harp seals are an ice-dependent species; they need thick sea ice to give birth to their babies on, nurse them, and let them learn to swim and fish on their own. If mother seals can’t find enough ice to give birth on, or if it melts from underneath them, seal pups will drown. 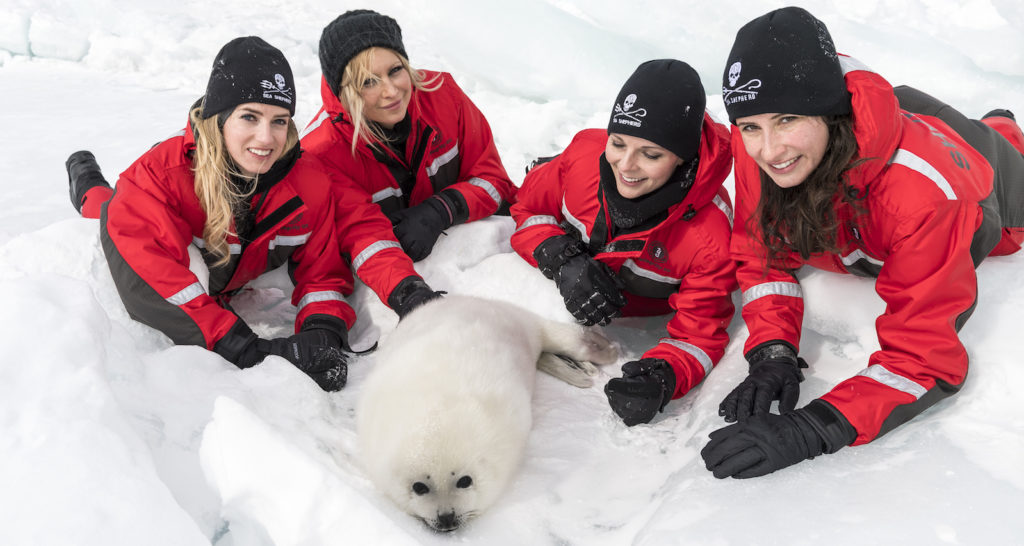 After hours of flying, we finally found a small patch of packed ice and a harp seal nursery with only a few thousand seals—a far cry from the tens of thousands we expected. We landed on the ice and stepped out into the icy wonderland in the midst of hundreds of baby whitecoat seals—newborn animals who were still nursing their mothers.

No matter how many times I visit seals, it always feels magical. Baby seals are incredibly trusting; they have never seen humans before and don’t fear us. They look up with black, liquid eyes, make soft noises, and if you lay still on the ice they may even come up to have a closer look. It’s especially incredible to watch them doze in the sun, warm in their thick fur.

We also saw a few “beater” seals—still babies, but slightly older as they have shed their white fur in favour of a silvery, spotted coat. (They’re called beaters because they beat their flippers in the water while learning to swim.) Whitecoats are protected from being killed, but once they begin to moult at only a few weeks of age and become beaters, they will be clubbed and shot. Their silver, spotted fur is what sealers are after.

On our second day, we returned to the area where the nursery had been only to find the solid ice was broken up by warmer weather and strong storm winds. After hours of zigzagging back and forth in search of the nursery, we feared the worst—that the babies drowned when the ice smashed and melted beneath them.

On our third and final day, we cheered after finally spotted a small scattering of seals, but the ice was still broken and thin. The helicopters couldn’t land on the precarious ice pans, so they dropped us off and hovered nearby. Our worst fears were confirmed—the larger patch of seals we saw on the first day was still nowhere to be found, suggesting they likely perished in the melting and broken ice. 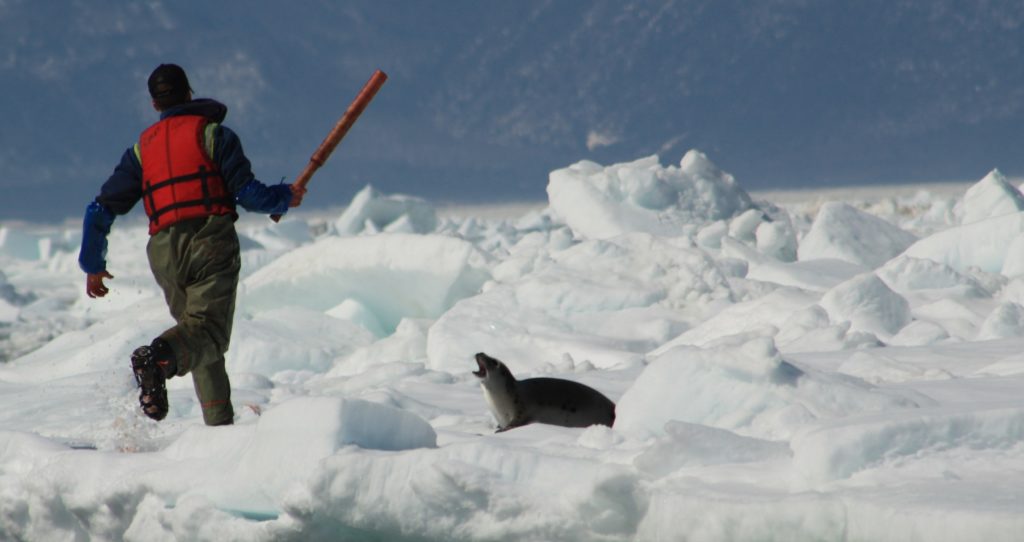 Harp seals have endured centuries of being clubbed and shot to death for their fur, but now they’re also facing global warming, which is literally melting their habitat out from underneath them. Sea ice has declined drastically over the past few decades, yet even with so many drowned seal pups, the Canadian government opened the hunt up early. It’s heartbreaking to think of the peace and beauty of the harp seal nursery being shattered by industrial sealing boats, gunfire, and hakapiks, with the baby seals bloodied and dead.

The good news is that dozens of countries around the world, including the entire European Union, have closed their borders to products of the cruel commercial seal slaughter. With markets shrinking, pelt prices are lower and fewer seals are being killed.

The seal hunt is an outdated, dying industry that is being kept on artificial life support by massive cash subsidies from taxpayers—even though most Canadians oppose commercial sealing. Please ask Prime Minister Justin Trudeau to end the East Coast seal hunt, buy back sealing licenses, and support humane ecotourism instead of brutal seal killing.