Ad Standards has confirmed that a misleading transit ad campaign paid for by the Dairy Farmers of Canada has been taken down!

The advertisement claimed “there are zero growth hormones in milk produced in Canada”, but this is false. IGF-1 is a naturally occurring growth hormone that is present in all cow’s milk, which helps turn baby calves into thousand-pound adults.

When Animal Justice heard from concerned citizens who were appalled by the dairy industry’s deceitful ad campaign, we assisted the public in filing complaints to the national regulator.

We’re pleased that the truth prevailed, and that this unlawful, misleading messaging will no longer appear on transit stops across the country. It remains to be seen whether television versions of the ads will also be removed. The ad campaign still includes a variety of other problematic ads over which complaints have been filed, such as a claim that only cow’s milk is “real” milk and that other milks are “nuts.” 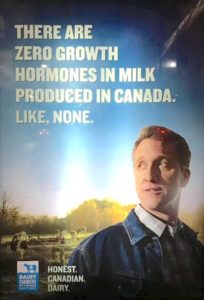 Many Canadians are shocked to the learn that the dairy industry has a $80 million annual advertising budget, used to dupe people into drinking cow’s milk that is inherently cruel to animals, linked with health problems, and detrimental to the environment.

This is not the first time that the dairy industry has misled consumers through false advertising. Back in 2016, Animal Justice filed a complaint with authorities when the Dairy Farmers of Canada partnered with health agencies to run ads suggesting that daily dairy consumption was necessary for good health. In fact, dairy is not a necessary part of the human diet and can in fact have adverse health effects.

It’s clear that the dairy industry is feeling the pressure of an evolving society that is looking to cruelty-free, healthy, and sustainable plant-based alternatives to traditional dairy products.

Plant-based milks now make up nearly 10% of all milk sales, and according to Statistics Canada, dairy consumption has fallen by 21.5% per capita since 2009. Dairy was even booted from having its own food group in the new plant-focused Canada Food Guide.

This massive societal shift to plant-based milk products will only continue to grow. Here’s to a future that is dairy-free, and better for animals and humans alike.

Yes, I want to stay in touch!

6 Reasons Why Marineland’s Proposed Beluga Export Should Be Blocked