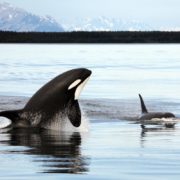 TORONTO – Animal Justice Canada Legislative Fund is applauding a groundbreaking announcement today by Community Safety Minister Yasir Naqvi that Ontario will ban captivity for orcas. In doing so, Ontario becomes the first Canadian province to join a growing list of countries that have said no to keeping orcas in captivity. This list comprises at least 14 countries, including Switzerland and India, and the state of South Carolina. New York and California are currently debating legislation that would ban orca captivity.

“This is a recognition that confining orcas in tiny tanks for our own entertainment is inhumane and no longer acceptable,” said Camille Labchuk, Director of Legal Advocacy for Animal Justice. “Captive orcas are deprived of the ability to perform important behaviours in a natural environment, including swimming long distances, socializing with family members, and hunting for food.”

“We welcome protection for orcas, but are concerned that the ban does not extend to all species of whales and dolphins. Other cetaceans are just as sensitive and intelligent as killer whales, and they also deserve freedom, not tanks.”

Ontario will also introduce new standards of care for marine mammals in captivity that it promises will be “the best in the world.” Unfortunately, the announcement does not appear to include licensing for aquariums or zoos. According to media reports, a new, voluntary registry for zoos and aquariums has only seen only 35 of the 62 zoos and aquariums in Ontario sign up.

“Animal Justice urges the province to license zoos and aquariums instead of maintaining a voluntary registry. Only a stringent licensing process will protect animal welfare and provide the oversight and transparency the public expects of facilities that keep animals.”