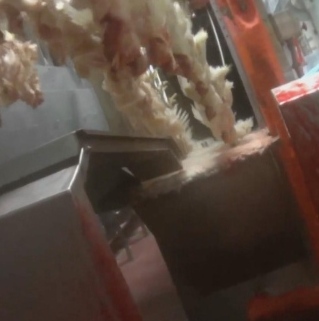 TORONTO – On Saturday evening, CTV’s W5 aired disturbing undercover footage of chickens being abused, apparently in violation of federal and provincial law. The footage was shot at one of Canada’s largest slaughterhouses, owned by Maple Lodge Farms.

Maple Lodge Farms is currently on probation following convictions in 2013 for 20 counts of animal cruelty offences under the federal Health of Animals Act. Moreover, in the first three quarters of 2014—the year following its conviction—it was fined for 14 separate animal welfare violations, significantly more than any other company in Canada.

Animal Justice Canada, a national charity that works to encourage enforcement of animal protection laws to prevent animals from abuse and killing, is now calling for charges against Maple Lodge Farms.

“Maple Lodge Farms should be held accountable for its pattern of unlawfully putting profits ahead of animal welfare. Canadians expect our government to rigorously enforce the animal protection laws that have been democratically enacted in this country.”

“When we use animals for food, our minimum legal and moral obligations are to prevent egregious animal suffering. Chickens are no different from our beloved cats and dogs in their capacity to experience fear and pain, and they are no less deserving of, or legally entitled to, protection.”