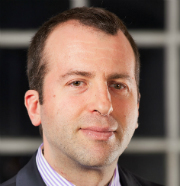 TORONTO – Animal Justice—Canada’s only animal-law organization—is thrilled to welcome Ari Goldkind to its board of advisors. A respected legal expert, Ari rose to prominence during the 2014 Toronto mayoral race in which he placed fourth and garnered widespread accolades for his eloquence, intelligence and honesty.

“Animal rights is a defining moral issue of our time,” said Ari Goldkind. “Having learned first-hand from my beloved dog, Ziggy, that animals are unique, emotional individuals just like we are, I am deeply troubled by the extent to which animals in Canada are unjustly suffering at human hands. Animal Justice is poised to become an increasingly significant player in the fight for animal protection and I’m thrilled to join this powerhouse team of advocates.”

Nicholas Wright, Animal Justice’s executive director, said: “Ari Goldkind has demonstrated an unrelenting commitment to truth and justice—hallmarks of advocates for society’s most marginalized members, including animals. It is an honour to have a social innovator like Ari Goldkind on our board of advisors.”